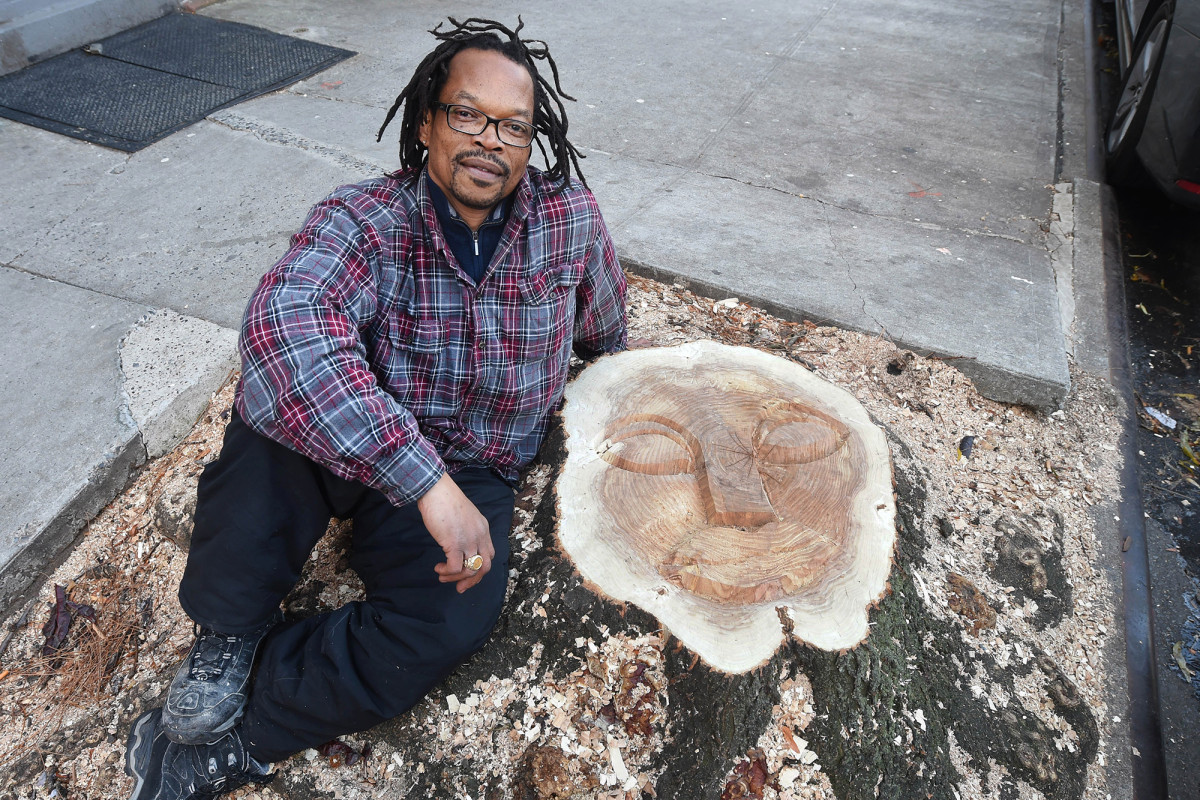 Ian Dave Knife wants to beautify the city — one stump at a time.

The East Village man is carving out a niche for himself in the Big Apple, transforming irritating “eyesores” into street art.

Knife’s mission is to brighten every locale where a once-magnificent tree has been reduced to a lonely stump due to fungus or decay.

“There’s a void when the tree is missing. You see the gap,” the Zimbabwe-born activist artist told The Post. “It’s human nature that we want to grieve or sympathize with the tree. You feel the loss. I want to replace that gap.”

Knife’s first foray was at East 11th Street near First Avenue, where earlier this month he carved a face into the stump. He dedicated the sculpture to the late urban artist, Keith Haring.

On Dec. 12 he etched a pained expression with protruding teeth in a stump right beside a Mexican restaurant on St. Marks Place, near First Avenue. Knife said the individual is perhaps biting his lower lip. He said the work is meant to be a “conversation piece” about police brutality.

Knife’s handiwork can also be seen on East Sixth Street and Avenue A (an “East Village crocodile”) and at scenic Rockefeller Lookout along the Palisades Parkway.

“The expressions on faces are easily understood. Sad face, happy face. But I will do flowers, animals and whatever the natural shape inspires,” he said.

Knife uses wood carving chisels to create each piece, which takes about two to four days to complete depending on the size and detail.

“I’ve never seen them being cut, I just find the ones that have been cut,” he said.

Knife’s works are influenced by Shona sculptures, the contemporary stone carvings that originate in his homeland. He compares himself to “a Shaman creating objects of power and energy.”

The 48-year-old likens each stump to a canvass that affords him an opportunity to “express my creativity, make some cool friends and beautify the neighborhood. … It’s also almost like a soapbox where I can raise topics and conversation and the matters that seem to affect us all.”

In the end, Knife said it’s all about “staying true to the history of street art in New York and using a media that no other artist saw as a blank canvas. I’m not vandalizing property. Instead I’m creating beautiful artwork … bringing life back into something that was cut down and left for dead.”

The city Parks Department called the sculptures “tree-mendous,” but added that eventually the stumps will be removed in order to plant new trees. The city removed 10,964 trees from Dec. 17, 2018 to the same date this year, an agency spokeswoman said.