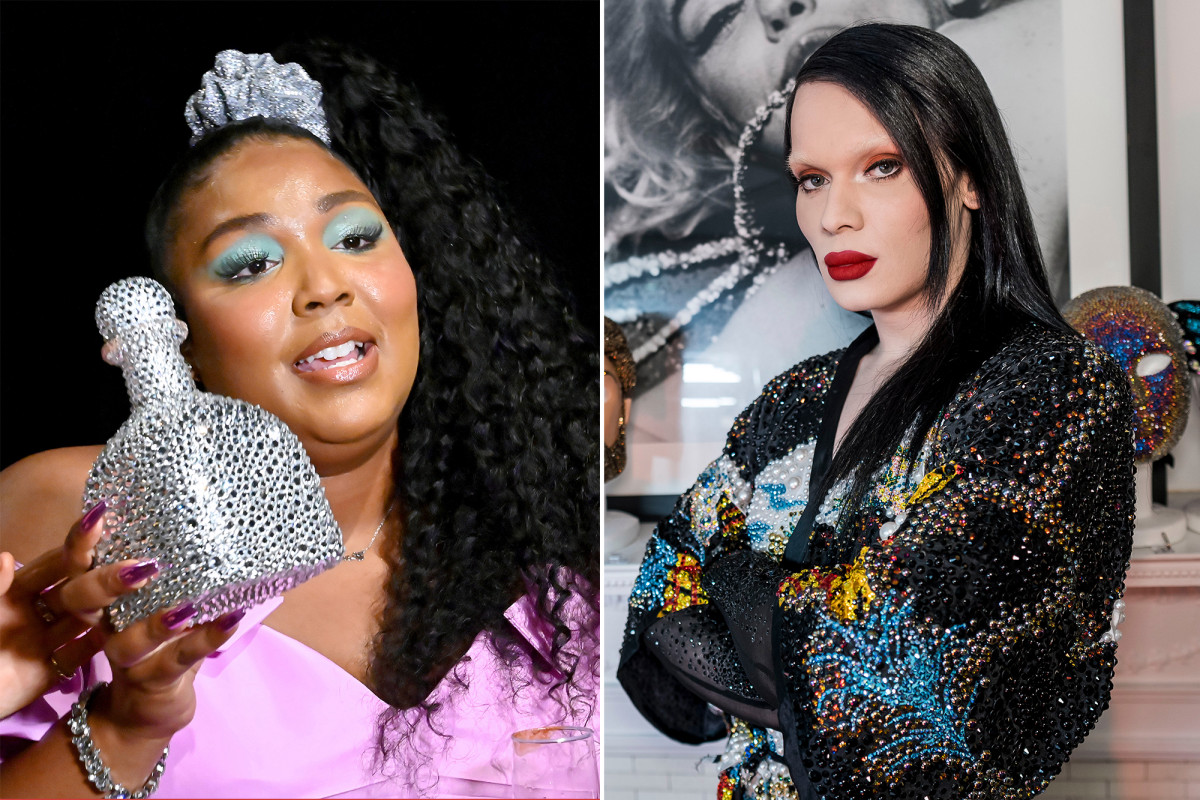 All it took for Kyle Farmery to go from fashion-school dropout to New York’s bling king was 7,000 rhinestones, eight hours and an Instagram post.

That’s basically how the bedazzled Patrón bottle he designed for Lizzo came to be. This past August, the “Juice” singer famously drank from it on stage at the MTV VMAs, which drew nearly 2 million viewers — and turned Farmery into a sparkle sensation.

“Lizzo’s stylist put out a call on social media asking if someone knew how to work with E6000 glue,” Farmery says. He’s a whiz with the stuff — it’s a crafting glue that’s perfect for rhinestoning — so he reached out to him on Instagram.

“At 11 p.m. we connected and I did [the bottle] overnight. All the rhinestone stores were closed so I had to reach out to a friend I had just bought some crystals for and take them back!”

A few weeks after the viral VMA performance, Patrón reached out and ordered 150 more rhinestoned bottles. He charged the company $650 a bottle. “You do the math,” he says.

Not a bad first six months in business.

Since then, Farmery has been working 12-hour days in his Clinton Hill studio. He started his company, Sparkyle Studio, a month before the VMAs, and has since bedazzled three pieces for Lizzo’s tour (a gold tequila bottle, blinged-out Jeffrey Campbell boots and a red crystal bodysuit).

He rhinestoned a Veuve Clicquot bottle with black crystals that’s currently in Diane von Furstenberg’s holiday window downtown, as well as an astronaut helmet for Suki Waterhouse and a scooter for Debi Mazar. Bergdorf Goodman bought out his entire first collection and even put some of his designs in a holiday window — one piece in the collection, a rhinestoned devil’s mask, sold for $1,950.

Farmery, who grew up in Tribeca, first met his mentor and best friend, nightlife fixture Amanda Lepore, after his mom took him to one of her calendar signings when he was 12.

“Amanda does her own crystalling and makes her own looks and she taught me everything I know,” Farmery says of the famous transgender performance artist and model, whose $100,000 body was referred to by filmmaker Joel Schumacher as a “moving sculpture.”

“After high school, I’d go to her house to work on pieces.”

He began going to clubs in his early teens and would spend all day creating a head-to-toe look for the evening. His style — a mix of drag and performance art inspired by Thierry Mugler and Bob Mackie — caught the attention of notable photographers such as Ellen Von Unwerth, Inez and Vinoodh, and Steven Klein. After graduating high school, he attended fashion school in London.

“That didn’t work out so great for me,” he says. So he moved back to NYC and landed internships at Zac Posen and with stylist and Italian Vogue editor-at-large Patti Wilson. Farmery says that was where he got his “real college education.”

Although he thought he’d be designing shoes or working in fashion in some way, Farmery says he never thought that his passion for rhinestoning could be its own business.

Despite creating elaborate outfits and glam hair and makeup looks to wear to the clubs — one red jumpsuit in his studio has more than 150,000 glued stones — Farmery says that, depending on the client, he works with all kinds of materials and brands from Swarovski to Party City.

“I go to sample sales or look on eBay and buy the worst pairs of Manolos or Louboutins,” Farmery says. “Scuffed up, ripped, falling apart, destroyed, you name it. Then I paint and rhinestone them. I buy plastic masks from Party City or a $10 mesh bodysuit on Amazon.”

Here, Farmery offers his best tips for your own DIY holiday bedazzling:

Put down the hot glue gun

“Do not use a hot glue gun for rhinestoning!” Farmery warns. “It doesn’t bond to the surface very well and all your hard work may end up falling off.” Farmery’s go-to glue is Gem Tac by Beacon, a non-toxic glue he discovered after trying “every possible glue you can think of — even nail and super glue.”

For wall-to-wall, zero-white-space looks on large surfaces, Farmery suggests coating the object you’re working on with a thin layer of glue using a paint brush. Let it dry before applying a second coat (“Wait 30 seconds for it to get tacky,” he says), and then start applying crystals. “If you’d like to do more of a spread out, dotted technique, you can use the applicator the glue comes with or, for smaller dots, fill a flat needle tip syringe with the glue. I’ve even used beeswax on the end of a chopstick to glue dots,” Farmery says.

Farmery’s favorite place to buy crystal rhinestones is Looking Glass Gems, an online shop out of Baltimore, Md., that sells “affordable glass rhinestones,” Farmery says, and one of the only companies that “can create custom glass rhinestones in different shapes, colors and sizes,” he adds. The company also makes Amanda Lepore’s exclusive crystal hearts. In New York, Farmery frequents B&Q Trimming in the Garment District.

It’s too thick and porous to be a good rhinestoning surface, Farmery says, and “the glue will seep into the fabric.” If you must use tricky fabrics such as velvet, felt or suede, opt for the Hot Fix brand of crystals and applicators. “Their crystals hold quite well to troublesome materials,” Farmery says. “I use it to decorate Christmas stockings!”

“A good way to revamp an old pair of high heels or boots is to paint them with acrylic paint, and then rhinestone them with whatever color crystals you’d like,” Farmery says. “Acrylic paint won’t peel.” Farmery prefers Lumiere paint from Jacquard.